While I was watching Neighbours today (ahem), one of the ad breaks screened a compilation album called Forbidden: Songs of Love, Lust & Blood. 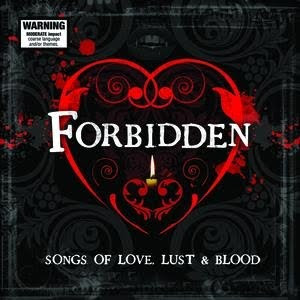 What does this have to do with vampires, praytell?

It was the angle being used to promote it. That's right, they were pitching a vampire connection!

The ad was too brief - and surprising - for me to have jotted down any notes (not that I sit in front of the telly with a notepad and pen in hand, mind you), so I'll hand you over to CD Online's spiel:

2 CDs for the lovers of all things vampire. The world has been swept up in the craze of Vampires, whether it be the romantic movies, tv series, books, actors etc, we can't get enough of this fantasy world. Disc 1 features Rock/Emo sounds with Vampire themes and Disc 2 features Acoustic/Indie focusing on love, lust & passion.

Some of the inclusions are certainly a bit...unusual. I mean, blink-182's "First Date"? 3 Doors Down's "Kryptonite"? Really?

Despite the (mostly American) acts present on the album, it's certainly an Aussie compilation in that it features a pretty decent amount of Australian acts, namely, The Living End, Short Stack, Kisschasy, Sia, Missy Higgins, Butterfly Boucher, Josh Pyke, The Audreys and Little Birdy.

It's quite obviously a cash-in on the recent release (November 19) of New Moon, but boy that cover looks pretty!

It's also interesting to see the romance (for want of a better word) angle being so prominently featured. Tragic love. That, I believe, is the drive behind the success of Meyer's books. Not vampires, per se, but the themes she explores in her series. The vampires, I think, are practically peripheral.

Now, as you may have noticed from the title of this entry, this is my hundredth post for this blog! So, after that previous ramble, I'll share some goodies with you to mark the occasion:
Well, that about wraps it up for now. Have fun kids!

I'd like to take the time to thank my readers, commentators, followers and even casual browsers of this blog. Wouldn't be much point without you!

I'd also like to give particular thanks to Niels K. Petersen and Andrew M. Boylan for some wonderful correspondence.

Thanks guys and keep up the good work!
Posted by Anthony Hogg at 7:57 PM

Good work. The design is awesome!

Apologies that it has taken me a little time to congratulate you on your 100th post and thank you for the name check, it is appreciated.

I really love it too. But, like I said, some of the songs on there are a tad suspect!

Cheers for that! The name check was earned. Heh heh.

It's been a bit chockers for me lately as well, so no harm done with the delay.

Something I gotta do for the new year: write more entries!