Shortly after I wrote this, I contacted Mr. Bell ("Food for the Dead", Wednesday, 5 May 2010 4:45:07 PM) as to whether his blog was the upcoming book, or if the book's gonna be available hardcopy.
I also asked about the "privately published" 2009 edition of Food for the Dead: On the Trail of New England's Vampires, that he sells through his site. How does it differentiate from the 2001 Carroll & Graf original? 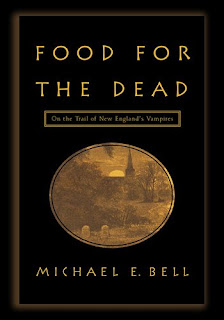 In terms of the sequel, The Vampire's Grasp: America's Restless Vampires, and its intended format, he mentioned ("Re: Food for the Dead‏", Sunday, 9 May 2010 1:16:14 AM) that, "The blog is basically a preview of some of the material I will be including in a hardcopy version of the new book."

And here's what he wrote concerning Food's 2009 edition:

Food for the Dead went our of print when the publisher, Carroll & Graf, was bought by the publisher of Basic Books, who eliminated the C&G imprint, so that everything that C&G had published was out-of-print. People still contacted me requesting copies, so I decided to have it reprinted. The text, photos, pages of the reprint are identical to the C&G trade paper edition. The cover is glossy instead of mat.

If you haven't got a copy of Food yet, then you're missing out! As I said before, it's "a classic of the vampirological genre." It even won the 2002 Lord Ruthven Award for Non-Fiction.

So, as you can imagine, I'm pretty enthused about the sequel. Still not crazy about its title, though.
Posted by Anthony Hogg at 2:17 AM