One of the greatest boons for vampire research is eBay.
Items of interest are generally available for low prices - barring currency exchange rates and shipping costs.

Here are a couple of recent items I managed to score: 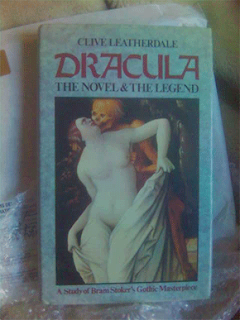 I'm not big on Dracula scholarship, but Leatherdale has some interesting things to say on the development of the Vampire Myth. 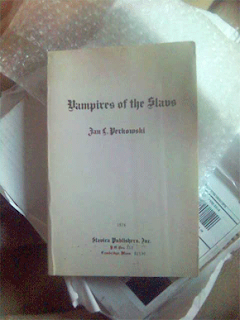 This is the paperback version. I've previously borrowed a hardback copy - but, in hindsight, that may have been a library hardback edition.

Certainly one of the most influential vampire anthologies, it's also not cheap to come by: some copies can sell up to $295 onwards. I was lucky enough to win this one for significantly less.
Posted by Anthony Hogg at 2:48 PM

I love Dracula: The Novel & the Legend: A Study of Bram Stoker's Gothic Masterpiece - an excellent purchase sir

My edition is a specially produced one for The Leisure Circle Limited by Thorsons Publishing Group Ltd also 1985.

I also have, as a companion volume, Leatherdale's Origins of Dracula - which is mainly extracts from sources Stoker used.

As it happens, we both have copies of the same edition!

The first edition was published as a paperback, by Aquarian Press.

The edition we have, however, is a first edition hardback.

Now, I'm going to take a punt and guess that your copy of The Origins of Dracula: The Background to Bram Stoker’s Gothic Masterpiece is the first edition (London: William Kimber, 1987).

If that's the case, then you might be interested to know that there is a second edition (Westcliff-on-Sea: Desert Island Books, 1995) available, too.